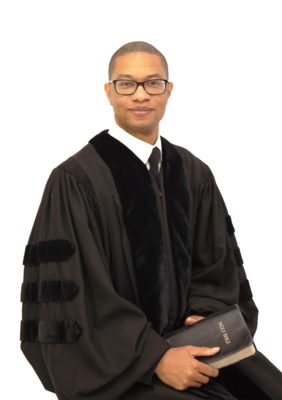 A third generation Baptist minister, the Reverend Dr. Jerry Michael Grimes II is a native of Goldsboro, North Carolina and is the son of the Reverend James E. Grimes, Sr. and Shelia Elaine Grimes.

With seventeen years of ministerial experience, Pastor Grimes served as an associate minister at the Historic First African Baptist Church in Goldsboro, North Carolina and interim pastor of Peter’s Tabernacle Missionary Baptist Church in Wallace, North Carolina before serving as senior pastor of Peter’s Tabernacle from 2010-2019.

A professional educator and national speaker, Dr. Grimes worked within the North Carolina Public School System before serving on the faculty of Shaw University in the Department of Religion and Philosophy.

Dr. Grimes has also served on the faculties of Apex School of Theology and North Carolina Wesleyan College, where he parlayed his corporate background with Coca-Cola Consolidated into a specialization in the area of Professional and Business Ethics.

A community activist who remains civically-engaged, Pastor Grimes has been awarded a grant and graduate fellowship from the Kern Family Foundation, served as an Executive Board member of the Kenansville Eastern Missionary Baptist Association, served as Vice Chairman of the Goldsboro-Wayne Transportation Authority and is a member of Phi Beta Sigma Fraternity.

Dr. Grimes holds the Master of Divinity from the Samuel DeWitt Proctor School of Theology at Virginia Union University in Richmond, Virginia and the Master of Arts in Theology from Fuller Theological Seminary in Pasadena, California.

Pastor Grimes later completed his advanced training earning the Master of Theology with a concentration in Ethics from Union Presbyterian Seminary in Richmond, Virginia, and in 2012, Pastor Grimes earned the Doctor of Ministry as a Graduate with High Distinction from the Rawlings School of Divinity at Liberty University.

He also completed his undergraduate work in the area of Film Production at Saint Augustine’s College in Raleigh, North Carolina and later studied at the University of North Carolina School of the Arts.

A frequent lecturer and literary contributor, Pastor Grimes has shared editorial duties on countless works in the area of applied theology to include Divine Inspiration for Victorious Living by the late Reverend Dr. Terry Thomas and The Forbidden Word by Dr. James H. Harris.

He is the husband of Tracy Moore Grimes and they have a daughter, Alexandria Elaine.

Pastor Grimes has one motto in his life and ministry: On the third day, He got up!